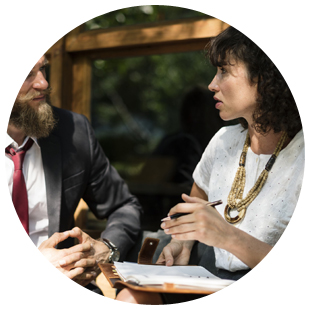 We all know it’s important to give feedback on how employees are doing, but in most cases, the way feedback happens isn’t all that effective. We place a huge emphasis on giving feedback and honing our methods of delivery to have our input hit the mark. But more often than not, the feedback we’re giving still doesn’t land the way we intended. What we don’t always factor in is that knowing how to give feedback is only part of the equation.

When feedback is received as part of an “ask” rather than a “give”, the employee is empowered.

Feedback is essential for learning from our successes and mistakes and improving performance, but employees are not always receptive to hearing unsolicited feedback, even when it’s diplomatically delivered. So, it comes as no big surprise that giving feedback often triggers a defensive response. And guess how effective we are at absorbing and applying the information we’re receiving when we’re on the defensive? (Spoiler: not very).

So how do we fix how we “do” feedback? By creating a culture where giving (often unsolicited, usually unwelcome) feedback is replaced by a culture of continuous learning and curiousity where regularly asking for feedback is the norm. When feedback is received as part of an “ask” rather than a “give”, the employee is empowered, and the resulting information is much more likely to be absorbed as a result.

Sound too good to be true? As with any culture initiative, creating a culture of asking for feedback takes time, but the payoff is worth it! Here are 5 ways to fix feedback in your organization:

1. Make it part of the bigger picture. Show that you value curiousity by dedicating effort and resources in continuous learning. Getting feedback can be uncomfortable, particularly if it’s not all positive. Help remove some of the negative connotations and uncomfortable reactions that can come along with the term “feedback” by cultivating an overall culture of continuous learning, and reframing mistakes as learning opportunities.

2. Put the feedback recipient in the driver’s seat. Feedback doesn’t have to be Giver-driven, so place the onus of responsibility on the Asker to solicit feedback! Though feedback conversations are often thought of as someone “giving” advice or constructive criticism, remove the expectation that feedback should be driven by the giver – this empowers the person receiving feedback. When feedback is asked for, it is likely to be heard, positively received and put into practice.

5. Focus on the positive. We tend to focus primarily on negative feedback as being most important as we drive to constantly improve – what could be done differently next time, and what activities need to stop or change. As a result, identifying successes is often neglected. But by articulating the positive, and recognising areas that are working, we narrow in on what we should be doing more of. Formalize opportunities to identify what’s working well by building time to solicit positive feedback and celebrate successes as a team into project meeting agendas. Pro Tip: Since we’re hardwired to pay closer attention to negative feedback, positive feedback should happen separately from constructive criticism to avoid watering down your message.

Your Engaged HR Assignment: Is your culture built around asking for feedback? If not, maybe now’s the time to make that shift. Use the five strategies we’ve shared above to help build a culture where the word “Feedback” doesn’t make people wince. Start small this week – ask your team what you could be doing more of.